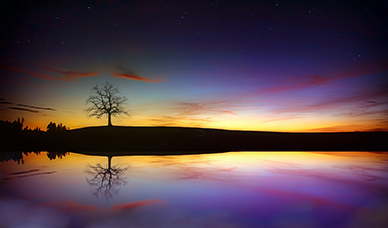 many years ago i was on a bicycle trip through some exceedingly picturesque countryside. suddenly, dark clouds piled up overhead and rain began to fall, but strange to relate, several hundred yards ahead of me the sun shone brilliantly. pedaling, however, as rapidly as i could, i found it impossible to get into the clear. the clouds with their rain kept advancing faster than i could race forward. i continued this unequal contest for an exhausting half hour, before realizing that i could not win my way to the bright area ahead of me.

then it dawned upon me that i was wasting my strength in unimportant hurry, while paying no attention whatsoever to the landscape for the sake of which i was making the trip.

the storm could not last forever and the discomfort was not unendurable. indeed, there was much to look at which might otherwise have escaped me. as i gazed about with sharpened appreciation, i saw colors and lines and contours that would have appeared differently under brilliant light. the rain mists which now crowned the wooded hills and the fresh clearness of the different greens were entrancing. my annoyance at the rain was gone and my eagerness to escape it vanished. it had provided me with a new view and helped me understand that the sources of beauty and satisfaction may be found close at hand within the range of one’s own sensibilities.

it made me think, then and later, about other matters to which this incident was related. it helped me realize that there is no sense in my attempting ever to flee from circumstances and conditions which cannot be avoided but which i might bravely meet and frequently mend and often turn to good account. i know that half the battle is won if i can face trouble with courage, disappointment with spirit, and triumph with humility. it has become ever clearer to me that danger is far from disaster, that defeat may be the forerunner of final victory, and that, in the last analysis, all achievement is perilously fragile unless based on enduring principles of moral conduct.

i have learned that trying to find a carefree world somewhere far off involves me in an endless chase in the course of which the opportunity for happiness and the happiness of attainment are all too i often lost in the chase itself. it has become apparent to me that i cannot wipe out the pains of existence by denying them, blaming them largely or completely on others, or running away from them.

the elements of weakness which mark every person cannot absolve me from the burdens and blessings of responsibility for myself and to others. i can magnify but never lessen my problems by ignoring, evading or exorcising them. i believe that my perplexities and difficulties can be considerably resolved, if not completely overcome, by my own attitudes and actions. i am convinced that there can be no guarantee of my happiness except that i help evoke and enhance it by the work of my hands and the dictates of my heart and the direction of my striving. i believe that deep faith in god is necessary to keep me and hold mankind uncowed and confident under the vagaries and ordeals of mortal experience, and particularly so in this period of revolutionary storm and travail. if my values receive their sanction and strength from relationship to divine law and acceptance of its ethical imperatives, then nothing can really harm me. “the lord is my shepherd; i shall not want.”

revelations on a bomb run

one day while piloting a bomber through the war skies of europe, i came to believe in the immortality of man. there was not any melodrama attached to this awakening. only through the thousand details of a mind absorbed in a bomb run came the discovery of a single fact: “know ye the truth, and the truth shall make ye free.”

below me were the alps, and the vision of hannibal crossing them in his time of war flashed through my mind, followed in rapid succession by the remembrance of all the histories of wars. i looked at the bomber machinery about me and at the battle signs of destruction below and realized this was only one of the thousands of wars man has been engaged in, and still he has flourished. so then, like the warm sun and friendly heaven and god’s other features about me, man, too, must be permanent.the warmth that came into the subzero cockpit with this divine realization made me know that here, at least for me, was the key to a happiness which had been missing before. the feeling of a day-to-day existence without hope for the tomorrow, changed to a sense of security and the knowledge of having a future. with this truth in mind, one cannot help but try to make a better world to live in.

this awakening came late to me, but with my children it will not be left to happenstance, for i have long since begun to show them the tying in of man’s immortality with the ageless evidences which are everywhere about us: the great artist’s glorious paintings of the heavens at sunrise and sunset; the delicate fragrance of a rose; the simple miracle of a newly born lamb; the massive majesty of snowcapped, purple mountains; the mysterious, many-faced sea hiding a thousands other worlds beneath its cloak; the twinkling lights from stars a billion miles away. they have learned these things are of god and are immortal, just as the music and the paintings of the old masters are god-given and ageless.

“but daddy,” they have asked me, “the papers say the atom bomb will kill off the human race someday, is that so?” how certainly i can assure them now, believing in the imperishability of man as i do. people said that when the spear came into existence, and the bow and arrow, and guns and bullets, and planes and bombs. but there has been someone more powerful than all these forces, and so we are here today, greater in number, healthier in body, and more advanced in science and learning than ever.have patience with all this hysteria, i tell them. after all, mankind is only a youngster, like one of you. the earth is an unknown millions of years old, while man is a mere 6,000 years of age. mankind is still growing up, comparatively, and his growth can be likened to your own. its like you and the neighboring children who have words and fight. someone gets a black eye, but you make up and then you work and play together again, and as you grow more mature you fight less often because you become more intelligent. so will it be with the world.

in giving these simple facts to my children, i continually add to my own faith in mankind. i believe man is basically good in heart, spiritually indestructible, and his place in the sun is assured because he is in god’s image. i believe all these things, sincerely; but more important, my children believe them, for it is they who hold the combination to man’s future peace and happiness.

the hidden world around us by professor harry a overstreet

ever since socrates was introduced to my adolescent mind he has been one chief master of my thinking. what he believed still seems to me to be indispensable for carrying on an intelligent and responsible life. he believed that he did not know. for myself, i have come to change his negative into a positive. i know that there is far more in this universe for me to know than i now know.

i recently had a dramatic illustration of this. my wife and i, driving through arizona, stopped at a “collector’s shop” in tucson, where stones and minerals of many kinds were on display. in the course of the visit, we were taken into a small room where rocks were laid out on shelves. they were quite ordinary-looking rocks. had i seen them on some hillside, i would not have given them a second thought. then the man closed the door so that the room was in total darkness and turned on an ultraviolet lamp.

instantly the prosaic rocks leaped into a kind of glory. brilliant colors of an indescribable beauty were there before our eyes.

a very simple thing—and yet a very tremendous thing—had happened. a certain power had been snapped on; and a hidden world leaped into life.

as i look at my universe and walk among my fellow humans, i have the deep belief that hidden realities are all around us. these hidden realities are there in the physical world; and they are there, also, in the human world. if i am foolish enough to think that i see all there is to be seen in front of my eyes, i simply miss the glory.

i believe, then, that my chief job in life—and my astonishing privilege—is to snap on an extra power so that i can see what my naked eyes—or my naked mind—cannot now see. i believe that i have to do this particularly with my human fellows. my ordinary eyes tend to stop short at those opaque envelopes we call human bodies. but we have learned that by turning on a certain power we can penetrate to the inside of these envelopes.

we call this extra power “imagination.” at its highest, we call it “empathy,” the power to see through and to feel through to the inner life of other human beings. it is a kind of ultraviolet lamp of our psychic life. when we turn on this lamp of imaginative sensitivity, we make the prosaic human beings around us come excitingly alive.zona gale once set down as the first article of her creed: “i believe in expanding the areas of my awareness.” i’d do the same. if i expand the areas of my awareness, i move understandingly into realities beyond me. when i move into them understandingly, i know what i can do and what i should do. if i don’t move in understandingly, if i stay in ignorance on the outside, then, in all likelihood, i will do mistaken things.

socrates gave no finished catalogue of the “truths” of the world. he gave, rather, the impulse to search. this is far better, i feel, than dogmatic certainty. when we are aware that there are glories of life still hidden from us, we walk humbly before the great unknown. but we do more than this: we try manfully to increase our powers of seeing and feeling so that we can turn what is still unknown into what is warmly and understandingly known…this, i believe, is our great human adventure.